The primary purpose of this deployment was to combine an extended series of measurements from the ARM Mobile Facility (AMF) with those from the GERB broad-band Earth radiation budget instrument on the METEOSAT operational geostationary satellite, to provide the first well-sampled, direct estimates of the divergence of solar and thermal radiation across the atmosphere. The deployment, at Niamey in Niger, was timed to coincide with the field phases and Special Observing Periods (SOPs) of the African Monsoon Multidisciplinary Analysis (AMMA) and related experiments in 2006. The SOPs sampled absorbing aerosols from desert dust and biomass burning in the dry season (in the DABEX experiment), through to deep convective clouds and large column moisture loadings during the summer monsoon, thus sampling many of the conditions that have been hypothesized as providing the source of any additional solar absorption. Several other applications were made possible by this deployment, notably studies of the impact of clouds, aerosol and water vapour on surface fluxes and validation of satellite-based estimates of surface fluxes through the large seasonal synoptic changes experienced in this part of West Africa.

The most obvious sampling issue addressed was the fact that GERB observes the Earth with a pixel size of about 50km at nadir, whereas the hemispheric radiometers at the AMF are sensitive to a much smaller area. This area depends on the instrument and conditions, but is no more than a few km. For cloudy conditions, for example, the effective area has a radius roughly twice the height of the cloud base. The active instruments measure conditions over a even smaller area, directly above the site.

Relating the measurements from GERB to those from the AMF thus involved bridging a gap of at least one order of magnitude in scale. The problem was not quite so daunting as it might have appeared, because the GERB operational processing system uses data from the SEVIRI high resolution imager on Meteosat-8 (Schmetz et al. 2002). The system performs scene identification using the SEVIRI radiances and then uses these radiances together with the CERES directional models to create a “resolution enhanced” flux product on a scale of 3x3 SEVIRI pixels; nominally 9km at nadir (Gonzalez et al. 2000, Harries et al. 2005). This product, together with the SEVIRI data themselves, carry information about the heterogeneity of the scene within the 50km GERB pixel and were used to bridge the scale gap between GERB and the AMF. A further problem at the time was that the GERB data was subject to a significant geolocation error, although this was reduced substantially by the time of the AMF deployment.

How serious the scaling problem was clearly depended on the magnitude of the heterogeneity of the atmosphere above the site and of the surface around the site. This was important because instantaneous radiances and fluxes are determined by the 3-dimensional distribution of atmospheric absorption and scattering above the site and by the distribution of surface properties (e.g. reflectivity, emissivity, temperature) in an area around the site. The scaling problem could be reduced for a uniform surface and for clear-sky conditions, but broken cloud cover and a non-uniform surface could cause problems. While the effects of atmospheric heterogeneities on the radiative fluxes could be reduced by temporal averaging (assuming that the wind advects atmospheric features with statistically unchanging properties over the site, which depends on the meteorological conditions), the effects of surface heterogeneities cannot be reduced in this way, since they remain in the same place relative to the AMF. These issues needed to be considered and it was important to map the surface characteristics around the site.

The list of variables required was as follows; 1. Broad-band upward and downward solar and thermal broad-band radiative fluxes at the surface. 2. Information on the atmospheric structure above the site. This included the atmospheric temperature and humidity profiles, the cloud structure (base, top, liquid and/or ice water mixing ratios, effective particle size). 3. Aerosol profile and information on the particle size distribution and phase function. This was especially important through DABEX, which was timed to coincide with the peak of the biomass burning season in this region, although outbreaks of Saharan dust could occur at any time of the year. 4. Spectrally resolved solar and thermal radiative fluxes/radiances. These were very useful in order to interpret the broad-band fluxes and as further validation for models. 5. Information on the heterogeneity of the atmosphere and surface surrounding the ARM site. Two scales were important; the smallest was concerned with the area likely to make an impact on the fluxes and radiances observed from the AMF itself (up to a few kilometres, as noted above). The largest represented a GERB pixel (about 50km at the sub-satellite point and slightly larger than this at Niamey). On that scale, it was also necessary to characterise the heterogeneity of the scenes within the GERB pixel, which required the scene identification analysis of SEVIRI data performed as part of the GERB data processing. 6. Information on the meteorological context of the AMF measurements, in the form of local synoptic measurements and operational numerical weather prediction (NWP) analyses and forecasts.

Many of the ARM measurements were themselves useful to other groups, for example those studying the geographical variability of the surface fluxes as well as the atmospheric structure. The data was also valuable for evaluating the NWP models.

In addition, AMMA groups deployed an enhanced network of surface observations and radiosonde launches. Several research aircraft were based in Niamey during AMMA and contributed to the project.

While it was intended to operate the AMF on a continuous basis, the work was enhanced considerably by coordination with the operational planning of the AMMA field phases. This required the establishment of suitable communications links with the AMMA teams, many of which were based in Niamey. 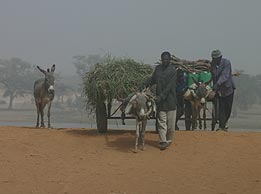 From January to March, the lower atmosphere in Niamey, Niger, is often laden with dust blown from the Sahara Desert, causing poor visibility. Scientists used data collected by the ARM Mobile Facility in 2006 to study the effects of Saharan dust and the West African monsoons.