UAS Success in Skies Above Oklahoma

For eight days in November 2021, something unexpected was in the skies above the wheat and corn fields near the small towns of Blackwell and Tonkawa in the north-central reaches of Oklahoma.

It wasn’t a bird, a weather balloon, or even an airplane. Instead, each day, an uncrewed aerial system (UAS) left the Blackwell-Tonkawa Municipal Airport and flew 1,000 feet above the farms, ranches, and the Salt Fork Arkansas River to its destination 13 miles away: the Atmospheric Radiation Measurement (ARM) user facility’s Southern Great Plains (SGP) atmospheric observatory.

The UAS test flights, operated by the Raspet Flight Research Laboratory at Mississippi State University (MSU), were a mission to demonstrate safe operations and collect atmospheric data. ARM and Raspet designed the Oklahoma flights as a continuation of the previous payload testing on the MSU TigerShark UAS platform in Mississippi.

ARM, a U.S. Department of Energy Office of Science user facility, worked with Raspet—experts in UAS operations—for much of the past year to fine-tune the performance of UAS used in atmospheric research. Raspet provided expertise in engineering, flight operations, and staggered visual observation.

Piloted remotely, the UAS followed a carefully planned flight path. Meanwhile, staggered visual observers stationed at farms and ranches between the airport and the SGP tracked the UAS to ensure safe operations. All flights avoided clouds and required a minimum of 3 miles of visibility.

High above the SGP, UAS pilots used different flight patterns to provide horizontal and vertical context to the collected data, including:

Engineering the Right Instrument for the Right Job

The ARM Aerial Facility (AAF) has long had its sights set on adding UAS to its observational capabilities to help meet the specific data needs of the ARM user community. According to AAF UAS Operations Lead Pete Carroll, ARM’s ArcticShark UAS is rated as “Group 3” (moderate-sized, about 14 feet long and 650 pounds) and propelled with a rotary engine and a four-blade prop.

“UAS are smaller than crewed aircraft and, with an operational footprint of just a few people, they are extremely economical,” says Carroll, explaining the benefits of UAS operations. “ARM’s ArcticShark UAS is capable of operating at 100-nautical-mile range in radio line of sight. And due to the nature of its precision autopilot, we can execute exact, repetitive flight plans.”

“We have a tremendous engineering team and industry partners. The ability to shrink instruments while maintaining accuracy is remarkable.”

One of the great AAF challenges is re-engineering instruments to be reduced in size and weight for aircraft. Instrumentation on a UAS must be further miniaturized.

“We have a tremendous engineering team and industry partners,” notes AAF Manager Beat Schmid. “The ability to shrink instruments while maintaining accuracy is remarkable.”

Jason Tomlinson, who leads the AAF’s engineering efforts, says that the focus is data quality and the confidence in that quality by the ARM user community.

“We have years of assurance with these instruments,” he says. “We know (the instrument) biases, so running (and calibrating) every day during these test flights allowed us to make a fantastic data set that is high quality.”

According to Tomlinson, the UAS instruments were routinely intercompared with instruments that flew on ARM’s now-retired Gulfstream-159 (G-1) aircraft.

According to Schmid, among other things, the Oklahoma flights were a proof-of-concept mission designed to evaluate the implementation of customized instrumentation and demonstrate safe operations.

“The Oklahoma flights met all objectives,” says Schmid. “We learned a lot, we operated safely, and the instruments performed as expected.”

A Continuing Partnership With MSU

Raspet’s work with the AAF didn’t end in Oklahoma.

“Raspet is an acknowledged leader in this area of aviation; we have valued their advice and counsel,” says Schmid. “As we move toward regular atmospheric observations and data collection with the ArcticShark platform, we will continue to work with Raspet and lean on their expertise.”

Adds Raspet Director Tom Brooks: “Operating our TigerShark above the SGP atmospheric observatory was rewarding for our team. Even more fulfilling than establishing this joint effort as the first to operate a UAS of this size for decades over this premier research facility are the quality relationships established between our team and ARM’s and the knowledge that, together, we’re advancing discovery science.”

During the Oklahoma mission, with each landing at the Blackwell-Tonkawa Municipal Airport, new operational information was learned, and each flight brought back gigabytes of new ARM data. Those data are now freely available on ARM Data Discovery.

ARM collects, processes, quality-checks, stores, and distributes continuous measurements gathered in climate-critical locations worldwide. Scientists use data from ARM to drive the research of atmospheric processes, while others use the data sets to improve predictive computer models of earth systems.

“Everybody around the world can download our research data free of charge,” says Fan Mei, who oversees science activities for the AAF.

Based on her review of users’ past challenges with integrating aerial data into their own research, Mei is now working on a peer-reviewed journal paper using data from the Oklahoma test flights.

“We want to make the aerial data collection and archive process more transparent to data users,” says Mei. “It will include the ground calibration of instrumentation, how we collected atmospheric data, the data quality control process, and how (aerial) data are made available to ARM users through ARM Data Discovery.” 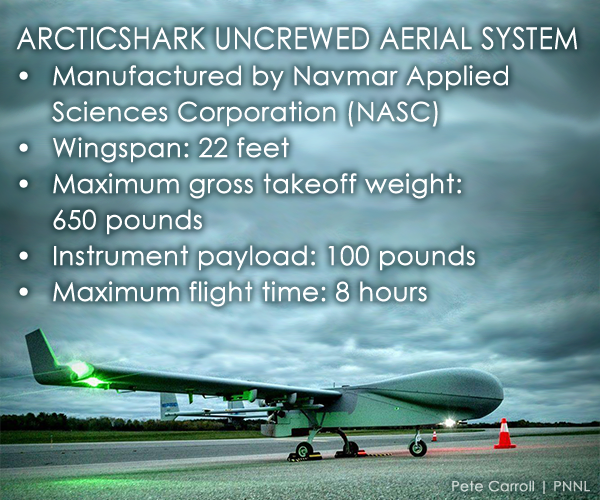 As the AAF team, with its Raspet partners, looks to the future, the goal is to replicate November’s success. “But this time, we’ll be flying the ArcticShark over the SGP,” says Schmid. “Eventually, we would like to see the ArcticShark become a frequent part of user proposals.”

Before Schmid and his team can achieve that goal, additional steps must happen with the ArcticShark, namely the demonstration of operational stability and additional training.

Between January and May 2022, ArcticShark maker Navmar Applied Sciences Corporation (NASC) will train three additional experienced aerial vehicle pilots (AVPs) to become ArcticShark pilots. AAF staff will be trained in the role of mission commanders who will sit in the right pilot seat in the Mobile Operation Center and be capable of flying the ArcticShark via autopilot programming. They will also be able to manually maintain basic aircraft control until an AVP can take over.

Also by May, the AAF core instrument payload will be re-integrated into the ArcticShark and test-flown. These activities will be carried out at Griffiss International Airport in Rome, New York.

The AAF also plans to allocate engineering flights to test Small Business Innovation Research (SBIR) instruments at a UAS range in Pendleton, Oregon. This range is about an hour’s drive south of the AAF’s home hangar in Pasco, Washington. AAF staff will also provide engineering support for the successful integration of the SBIR instruments into the ArcticShark.