Clouds and Precipitation: Advice to ARM From Experts

Clouds stay up. Precipitation comes down.

Earth’s climate, to a great degree, pivots on these two components of the planet’s water and energy cycles.

Add in aerosols and you have a trinity of complex processes that interact with radiation to determine the atmospheric conditions of life on Earth. (Aerosols are tiny solid and liquid particles in the air. They are the seeds on which cloud particles form; they spur or delay precipitation; and they reflect or absorb solar and surface radiative energy.)

For almost 30 years, one entity at the U.S. Department of Energy (DOE) has pulled in data on all these processes. The Atmospheric Radiation Measurement (ARM) user facility, which has three fixed and three mobile observatories, collects and archives cloud, precipitation, and aerosol measurements in climate-critical regions around the world.

In 2019, ARM established the Cloud and Precipitation Measurements and Science Group (CPMSG) to sharpen the efficiency of how some of these measurements are made. It is the newest of the user facility’s three constituent advisory groups, which offer guidance to ARM leadership. 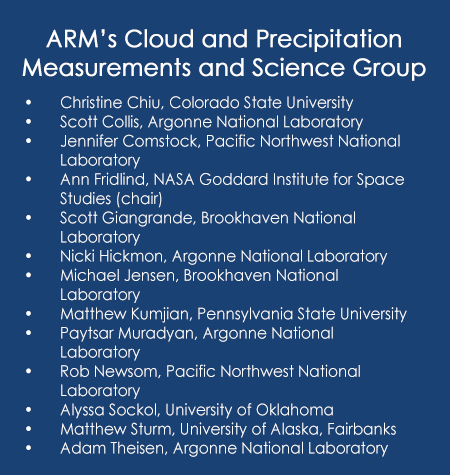 The CPMSG, chartered in March 2019, consists of 13 scientists, engineers, instrument operators, data translators, and ARM managers. The group was chosen to represent a range in cloud and precipitation processes and ARM measurement capabilities.

Like the other constituent groups, the CPMSG reports to ARM Technical Director Jim Mather, an atmospheric scientist at Pacific Northwest National Laboratory (PNNL) in Washington state.

For all the constituent groups, says Mather, the operative question is: “How can ARM better serve its community of scientists?”

ASR funds projects devoted to better understanding atmospheric processes and improving how they are represented in models.

The CPMSG grapples with clouds and precipitation, which are hard-to-measure heavyweights in the water and energy cycles that drive our climate system.

Clouds are complex, various, changeable, and short-lived. They also operate on a large range of scales, from cloud droplets as small as a few micrometers, to individual clouds that may span from hundreds of meters to many kilometers wide. (Cloud systems can be on the order of 1,000 kilometers―621 miles―across.)

In all, accurately representing clouds remains the biggest challenge in modeling earth systems.

Precipitation comes with its own challenges. In all its forms, precipitation is largely measured by ground-based instruments that have space and time limitations and by radars that are hard to calibrate and maintain.

The plots of Earth’s surface that scientists can measure present a challenge too. To take rain as an example: Worldwide, all the rain gauges linked to databases would cover an area about half the size of an American football field. Those that record real-time data would fit inside a tennis court.

Satellite platforms provide abundant data. But they are often unable to sense near-surface processes at a resolution sufficient to explain uncertain aerosol and cloud processes. Researchers still need a better understanding of the microphysics behind it all.

CPMSG members are working on their first recommendations report, which they will deliver late in 2020. Periodically, they gather to confer officially―about eight times so far in the last year.

On March 23 and 24, 2020, the group held its biggest and most formal meeting so far. Fridlind hosted from a desk in her Manhattan apartment.

Gathered virtually were about 20 CPMSG members, guest scientists, and ARM managers, including Mather. Together, they shared new research and deliberated recommendations. Among the invitees were the working group co-chairs of ASR’s three cloud-oriented working groups―those on warm shallow clouds, high-latitude clouds, and deep convective clouds. Much of the workshop was organized around these themes.

One overarching question for the CPMSG, says Fridlind, is: “What nominal investment can (ARM) make to take the science further?”

Results of the workshop will be discussed at the 2020 Joint ARM User Facility/ASR Principal Investigators Meeting, slated to take place remotely from June 23 to 26, during a session on ARM’s strategic plan for the next decade.

CPMSG meetings are part of “a deep culture of grassroots leadership” at DOE and ARM, says Fridlind.

By increments, the CPMSG is trying to fill in cloud and precipitation knowledge gaps, in part by providing guidance on instruments and measurement strategies.

The March workshop, for instance, touched on an investment theme gaining traction lately: a microwave radiometer that functions under rainy conditions.

Such instruments, which resemble rural roadside mailboxes, take time-series measurements of the radiative emissions produced by molecules of water vapor and liquid water in the atmosphere.

The radomes that protect radiometer antennae, however, get smeared by rain and ice. “Precipitating conditions,” as University of Oklahoma workshop participant Greg McFarquhar put it, degrade instrument retrieval performance, starting at about 200 grams per meter squared, in the case of rain. That means less accurate data on temperature, humidity, brightness, and cloud-liquid quantity.

McFarquhar is co-chair of ASR’s High-Latitude Processes group and one of five ASR working group co-chairs who participated in the workshop. Inviting all of them, says Mather, “was part of an effort to build a strong connection between CPMSG and ASR-funded scientists.”

Fridlind distributed a list of suggested recommendations ahead of time. By session’s end, they called for:

“A living list of investment priorities can capture a widespread knowledge base” for DOE, ARM, and ASR.

An open and dynamic information matrix, says Fridlind, will harness the knowledge base of the ARM/ASR community.

“A living list of investment priorities can capture a widespread knowledge base” for DOE, ARM, and ASR, she says, and provide “a roadmap to improve climate models that deepens the existing (ARM) culture for consensus recommendations.”

Fridlind conceived of the matrix as a living document, but she credits Colorado State University researcher and CPMSG member Christine Chiu for the core notion of casting the process in such a format.

Mather floated the idea that each of ARM’s science advisory groups adopt the matrix “as a rolling track to identify our specific goals and a lot of useful information on the shape of things.”

Gijs de Boer, co-chair of ASR’s High-Latitude Processes working group, suggested adding a matrix column on model development. The suggestion from de Boer, a research scientist based at the University of Colorado, Boulder, was one of many give-and-take comments on the scheme over two days.

“Having input from modelers would be good,” agrees CPMSG member Matthew Kumjian, a radar meteorologist from Pennsylvania State University―and it would “foster collaborations too.”

Fridlind is an active researcher and author, particularly in the realm of polar cloud types. She co-authored two recent papers, both related to the 2015–2017 ARM West Antarctic Radiation Experiment (AWARE).

“It’s an exciting data set,” she says, “since we have so little data from Antarctica.”

One paper was accepted in late April 2020 by Geophysical Research Letters and led by Pennsylvania State University researcher Israel Silber, who is working with Fridlind. It reports that non-turbulent supercooled clouds are more common in polar regions than previously thought. The study also linked such clouds to gravity waves that promote droplet activation.

She also co-authored a paper on AWARE case studies that the Bulletin of the American Meteorological Society (BAMS) published online in February 2020. Data used in the studies can be found in the ARM Data Center.

Following the polar-clouds theme, Fridlind is a co-investigator in an ASR project on ice processes and cloud and precipitation physics in Antarctica.

Though principally a modeler, Fridlind has traveled widely for science, including trips to field campaigns in Alaska, Australia, and Namibia in southwestern Africa.

“Without those observations,” she says, “we would never know what’s wrong with our models.”

Read a full scientist profile of Fridlind on the ASR website.