The overarching purpose of the Surface Heat Budget of the Arctic Ocean (SHEBA) was to produce year-long retrievals of cloud properties, including crystal/droplet sizes, optical depths, water contents, and cloud boundaries through the depth of the troposphere. These results were intended to enhance the understanding of the thermodynamic coupling between the atmosphere and the ocean when covered with sea ice. 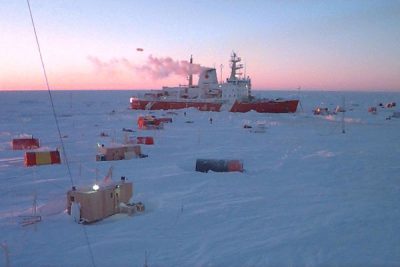 In 1997, SHEBA participants placed a Canadian icebreaker, DesGroseilliers, in the Arctic ice pack 570 kilometers northeast of Prudhoe Bay, Alaska. During its year-long deployment, the DesGroseilliers powered a comprehensive suite of atmospheric, ocean, and ice sensors that were operated on the ship and the surrounding ice floe. In addition, ARM deployed two dozen instruments, including a lidar and millimeter cloud radar, and gathered 10 sets of vertical profiles of clouds and aerosol properties data from over the SHEBA site.

The interdisciplinary effort between ARM and NOAA for SHEBA consisted of three phases. The first began in 1995 with the examination of existing Arctic data and models, the second involved the deployment and operation of instruments as part of SHEBA field effort, and the third ended in 2002 with in-depth analysis of processes and feedback mechanisms from data obtained during the SHEBA deployment. Both ARM and NOAA contributed equipment, data, and personnel to this NSF-funded multiseason field experiment, which helped develop detailed models of physical processes on a local and aggregate scale.

Silber I and M Shupe. 2022. "Insights on sources and formation mechanisms of liquid-bearing clouds over MOSAiC examined from a Lagrangian framework." Elementa: Science of the Anthropocene, 10(1), 10.1525/elementa.2021.000071.
Research Highlight