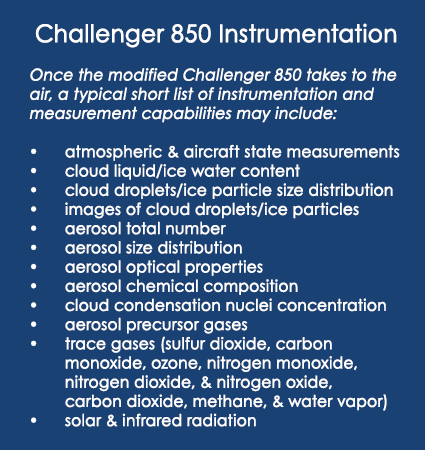 One short year after the Atmospheric Radiation Measurement (ARM) Aerial Facility (AAF) finalized the purchase of its new Bombardier Challenger 850 regional jet, the aircraft lifted off a Texas tarmac and landed in Ontario, Canada. There, it will spend the next 18 months transforming from a business jet into ARM’s new laboratory in the sky.

“All the nice interior, including the leather seats, will have to go,” says AAF Manager Beat Schmid with a smile. “We need to make this a utilitarian aircraft designed with a focus on instrument racks and research stations.”

“There are many steps that need to happen to convert a business jet into a platform for aerial research,” says Schmid.

A team led by FMS Aerospace of Huntsville, Alabama, was selected to lead the modification work, and for the next year and a half, Voyageur Aviation Corp. of North Bay, Ontario, will complete the hands-on work to convert the business jet into a configuration better suited for science.

According to Jason Tomlinson, the AAF’s director of engineering, the next successful step in the modification process will be due to the engagement of ARM users. This included ongoing outreach and feedback received during the ARM Aerial Instrumentation Workshop in March 2020. 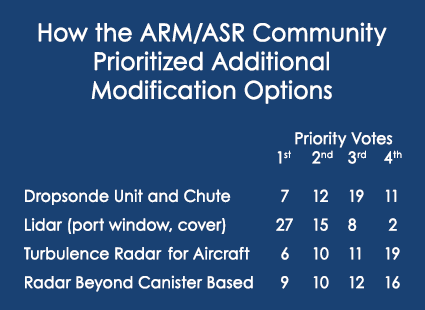 “We had an opportunity to listen to researchers and build what they need into the design,” he says. “We really owe our sincere thanks to the ARM community for their honest reviews and opinions.”

Fifty participants voted to prioritize options or modifications for the aircraft that would go beyond what is currently in the modification plan. Lidar was the overwhelming audience favorite (see chart to the left). According to Schmid, this feedback helps AAF prioritize future investments.

Modifications are much more than removing luxury seating. When complete, a no-frills interior will feature comfortably spaced instrument racks from front to back—all with neatly routed electrical and vacuum tubing.

“We’re looking forward to a more open cabin that will allow more instrumentation and flexibility to meet the needs of the ARM research community,” says Tomlinson, noting that key cost drivers are external modifications, including three pylons under each wing. “The pylon location is exciting. It will really satisfy the needs of our PIs when it comes to cloud sampling and other measurements.”

The front service door area—typically used as a galley for passenger jets—will house a variety of external instruments. Different instruments will go in place of the front two windows. Other areas of modification include large ports on the fuselage and belly of the aircraft that will either look up or down to accommodate instrumentation.

“It’s a very big deal to design and fabricate these to not only accommodate instruments, but to get FAA (Federal Aviation Administration) certification to ensure we have a safe design,” says Schmid. “FMS and Voyageur bring tremendous expertise to the table. Other members of the FMS team are contributing great planning and engineering expertise.”

Next Stop: A New Hangar

The complex work of modifying the Challenger 850 to its new life in science will take about 18 months. If all goes as planned, the aircraft’s next landing will be in its new hometown of Pasco, Washington, in early 2022.

To prepare for this arrival, the AAF expects to take occupancy of a new 18,000-square-foot hangar at the Tri-Cities Airport in summer 2020. Leased from the Port of Pasco, this facility was built to meet AAF requirements, including aircraft storage and maintenance, as well as maintenance of AAF instrumentation and the ArcticShark unmanned aerial system. It also offers office space for 15 AAF staff members and visiting scientists.

Once the aircraft arrives, the AAF team will start to install instrumentation and test the aircraft. Pilots and maintenance staff will be trained, and by mid-year 2023, ARM’s new Challenger 850 will be ready for its first science mission.

“We are looking forward to research opportunities we didn’t have before,” adds Tomlinson, referring to the now-retired Gulfstream-159 (G-1) research aircraft. “The G-1 was a great workhorse over the years, but it had a limited range, and it wasn’t able to sample high cirrus clouds. Going forward with the new Challenger 850, we’ll be able to do much more. It has the sampling capabilities of the G-1 for ‘low and slow’ flight while providing enhanced performance, including better payload capacity, improved endurance, the ability to fly higher, and for extended geographic ranges.”